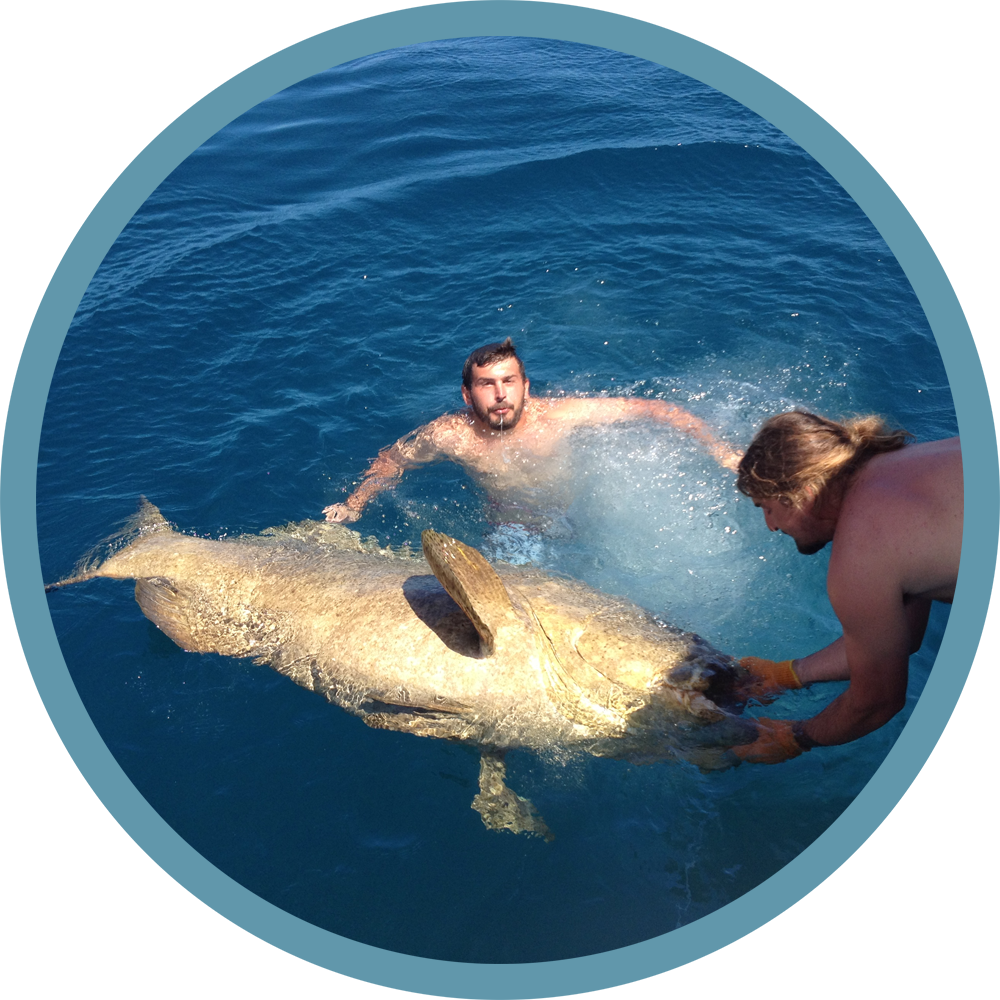 We have custom tailored a Goliath Grouper Fishing Charter just for you!

We have custom tailored a Goliath Grouper Fishing Charter just for you!

Hook onto a beast with our Goliath Grouper fishing charters in Florida. We’ll give you the chance to experience an exhilarating tug-of-war with one of the ocean’s real monsters. From fishing for “bait” to fighting the Goliath itself, this bucket-list fishing charter isn’t for the faint of heart. To book a Goliath Grouper Fishing Charter in Florida today, CALL or TEXT (727) 753-8883.

Our Goliath Grouper fishing charters in Florida present a serious rod-bending and heart-pounding experience. Action-packed from the moment we hit the water, you’ll spend some time fishing for bait such as catfish, stingrays, crevalle jacks and more. Once we’ve loaded up enough bait, we’ll lure in large fish, including the mighty Goliath grouper. These heavyweight beasts are strong enough to pull you to your knees, as they bend your rod in an epic tug-of-war. We’ll be alongside you, assuring you stay safe until you or the Goliath give in.

Once the grouper is hooked, they’ll push your bravery and strength to the edge. The Goliath’s power is unexplainable without actually feeling it yourself. Nothing quite compares to the feeling of connecting with one of nature’s true beasts. You’ll be clinging on for dear life! Once you’ve gained control of the Goliath, you can get a picture to boast about for the rest of your life.

Kyle Johnson
13:45 08 Oct 22
I have now been out with these guys on 4 different trips. That says it all right there! I have done 3 in the keys and 1 out of the Tampa area. They do both inshore/back country and offshore. I have done both and they did not disappoint.Both Captain Chris and Captain Donny are amazing and make for an unforgettable day every time I step on one of their boats. They both feel like your friends by the end of the day and truly want you to fill the cooler. They know their stuff and will put you on fish!No question of who I will use or refer friends and family to when it comes to fishing in Florida.

cindy dickerson
00:59 08 Oct 22
We had a great day! Our captain really knew his stuff and we had lots of fun bringing up big fish!

Keith Jones
00:52 08 Oct 22
Best fishing experience ever! Capt Donnie, and Capt Chris are amazing! We have been out multiple times with them fishing. I refuse to go with anyone else with how awesome fishing is with them!!! You want to have a great time and catch fish contact them right away!!!

Stephen Cantelli
19:20 02 Aug 22
Nick was a fantastic captain. He had a great sense of humor and has a local flare. He was great at keeping the lines baited and you never had to touch a bait or touch the fish he was really good at his job. Fishing was a little slow today but I'm sure my son says they don't call it catching for a reason.

shaun mathena
02:18 07 Jul 22
Chris was phenomenal. Would definitely use again. We limited out on red snapper, grouper and caught tons of mangos as well. Thank you captain Chris 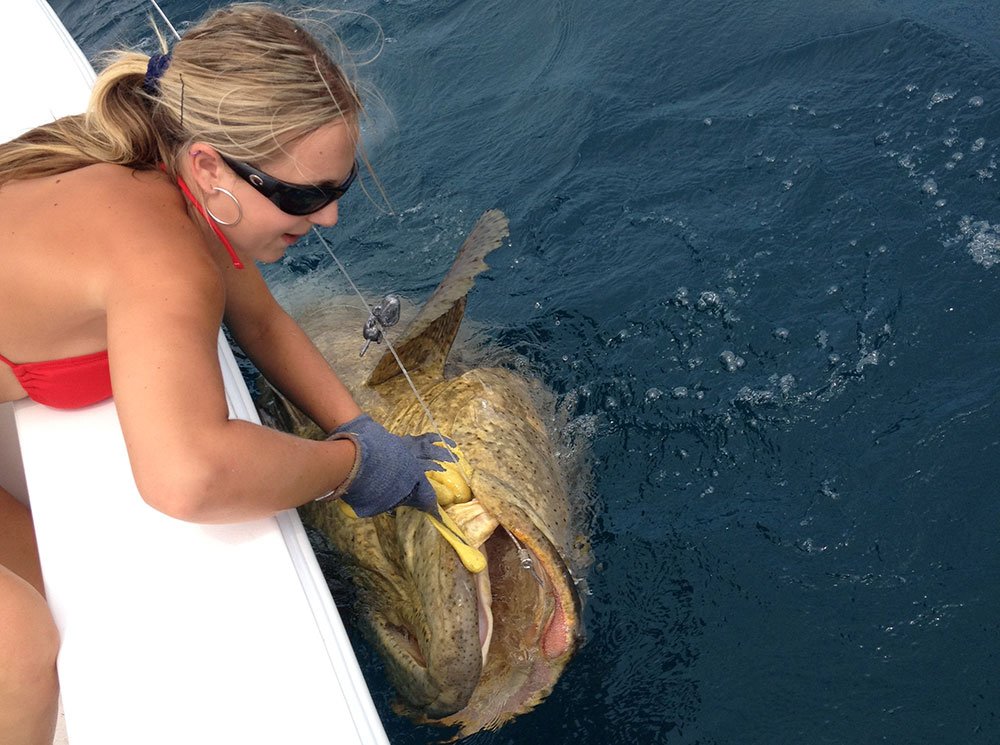 The Beast – The Goliath Grouper

The Goliath Grouper is one of the biggest, beefiest fish you’ll find on a fishing charter in Florida. The Goliath is the largest grouper in the western hemisphere and can weigh as much as 1,000lbs and span 8ft, aging as old as 37 years old. In Florida, they usually weigh between 100-600 lbs. They’re a wonder of nature and a favorite for anglers, as they’re truly unique in size and character.

Formerly called ‘Jewfish,’ they have brown or yellow mottling, with black spots on their head and fins. Their largemouth features jawbones that extend past their small eyes. Goliath groupers mostly feed on slow-moving prey, such as crabs and slow-moving fish. They swallow their prey whole and are easily enticed by large bait.

These giants are curious and fearless. Rumors and reports over the years have even described Goliaths swimming near diving and spearfishing operations, looking for a meal. Their deep roar (produced by bladder contractions and used as sonar) is enough to make a grown man shiver. The good news for you is, they’re slow and sluggish. That means we can track them easily. However, their incredible strength will make you work hard! You’ve been warned; these guys are no joke, they are monsters.

Where to Catch Goliath Grouper?

These beasts are found all over from Florida to Brazil, making Goliath grouper fishing charters in the Gulf of Mexico a huge success. Smaller Goliaths tend to live in the mangroves, while the bigger ones prefer reefs, bridges, piers and wrecks. They can be caught all year-round.

How to Catch Goliath Grouper?

The Goliath might be a strong creature, but they’re slow, which means you need power more than skill. They’ll go for anything, so dropping live or cut fish down will do the trick. The heavier the tackle, the better. The Goliath has evolved to head to cover as soon as they’re hooked, so be careful!

We’re proud to provide goliath grouper hand line fishing, for that true one-on-one experience without rod and reel. It’s man vs fish, do you have the endurance?

Are Goliath Grouper Good to Eat?

Excellent, but strictly forbidden! Every catch on your Goliath grouper fishing charter in Florida must be released back into the water.

The Goliath grouper is a federally protected species. With harvest rightly forbidden, sports fishing is the only way to see these beautiful creatures up close. On our Goliath grouper fishing charters in Florida, we take all the necessary precautions to ensure their life is preserved while allowing you to experience their power up close. Armed with state-of-the-art rods, we use large fish as bait to entice the goliaths off the wreck or reef – giving you a head start in the fight. Over the past ten years, the Gulf of Mexico has seen the Goliath grouper population explode, thanks to the regulations put in place by the FWC.

Your safety is our priority. Our captains have spent over 30 years out on the waters, helping people of all skill levels to stay safe while experiencing the thrills of fishing. From handling your rod to staying on the boat, we’ll keep you safe during the battle of a lifetime.

If you’re interested in booking a Red Drum or Goliath Grouper Fishing Charter in Florida, then contact us today. These famous and exciting fighters guarantee an up-close experience. We would love to welcome you onboard one of our boats to make another fishing dream come true. Let’s go fishing and experience the adventure together!